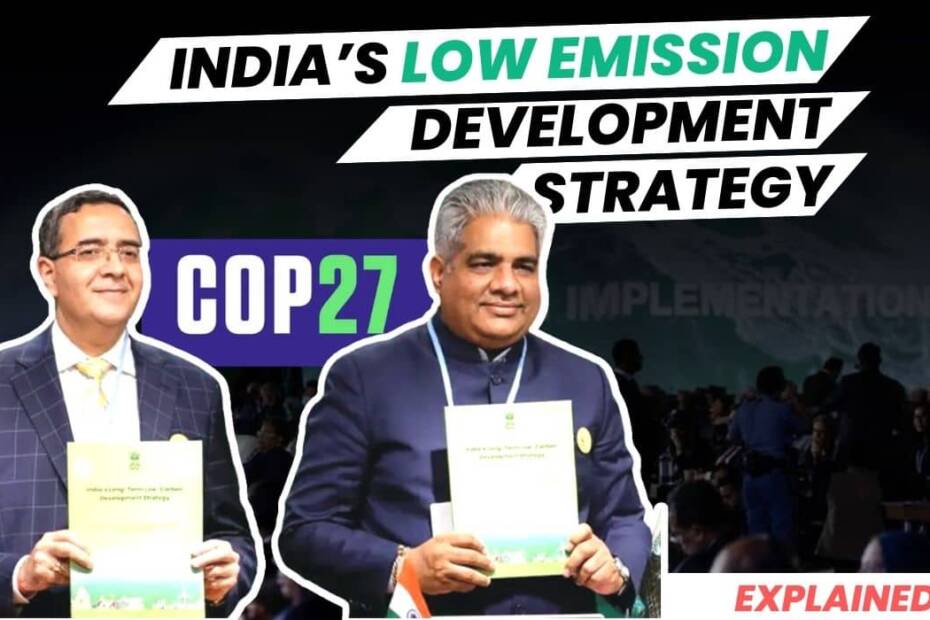 In the COP26 climate summit, held last year in Glasglow U.K, GOI made global commitments to make India a carbon-neutral country by 2070, wherein 30% of the vehicles on the Indian roads will be electric and  50% of the energy required for carbon-free mobility, will be fulfilled from the renewable resources by 2030.

Moving towards the target to achieve a net-zero emission goal of 2070, India has submitted a strategy layout towards carbon-free mobility to United Nations Framework Convention on Climate Change (UNFCCC), at COP 27 summit held in Sharm el-Sheikh, Egypt 2022.

LT-LEDS is a requirement of the Paris Accord 2015, a treaty on climate change. Countries present their strategy for achieving net-zero emissions over a period of time.

The long-Term Low Emission Development strategy talks about GOI’s goal and doings till 2070 for a sustainable and emission-free nation. Building social and economic capacity to withstand any form of crisis or pandemic.

As per the strategy, GOI is aiming to make India the epicenter for Hydrogen-powered vehicles by expanding the production of green hydrogen by increasing India’s electrolyzer manufacturing capacity by 2032.

GOI plans to make India a global hub for green hydrogen by 2032 to fulfill the goals of the National Hydrogen Mission launched in 2021.

Hydrogen as a fuel is produced using :

The strategy entails maximizing ethanol blending, ethanol mixed with petrol which will eventually bring down the percentage of harmful chemicals, which were earlier emitted by petrol alone.

As a result of the constant push from the Central Government, ethanol blending is expected to reach 20% by 2025 in India.

Along with Ethanol Blending, the strategy also encourages the maximum use of biofuels and flex fuels as mobility energy sources, along with the maximum penetration of Electric vehicles by 2025.

With a strong emphasis on public transport, LT- LEDS points towards alternate modes of urban commute through EVs in India.

With the help of the ‘Aatmanirbhar Bharat’ and ‘Make in India’ visions, India’s industrial sector is growing exponentially.

India aims to focus on energy efficiency during the transition to a lower Carbon footprint using the Perform, Achieve, and Trade (PAT) scheme. The strategy states that the vision of Carbon-free mobility should not harm any energy security, access, and overall employment.

Under the strategy, GOI emphasizes the development of the recycling industry which will eventually lead to a circular economy.

The strategy also entails the requisite for sustainable urban development, driven by smart city initiatives, and integrated planning of cities for proper utilization of resources, with a major focus on the management of solid and liquid waste coming out of these future megacities.

India is on its track to achieve an NDC commitment of 2.5 to 3 Billion tonnes of additional carbon sequestration in India’s forest and tree cover by 2030 to reduce the atmospheric CO2.

Compared to forest fire incidents in different countries across the globe, the numbers are significantly lower in India. In 2016, 15% of the total Carbon emitted due to the ICE-based vehicle sequestrated by the forest and tree covers of India.

The submitted plan emphasizes India’s stronghold in enhancing forest and tree cover which will add to the economic growth.

The transition to a carbon-neutral nation requires the development of new technologies and infrastructure, which is likely to cost India trillions of dollars by 2050.

The newly planned Strategy emphasizes the need for enhanced climate finance provision from the developed countries in the form of grants and loans, according to the principles of UNFCCC.

The Long-Term Low Emission Development (LT- LEDS) strategy is mapped out after extensive consultation with all relevant ministries and departments of state and central governments, research organizations, and civil society organizations.