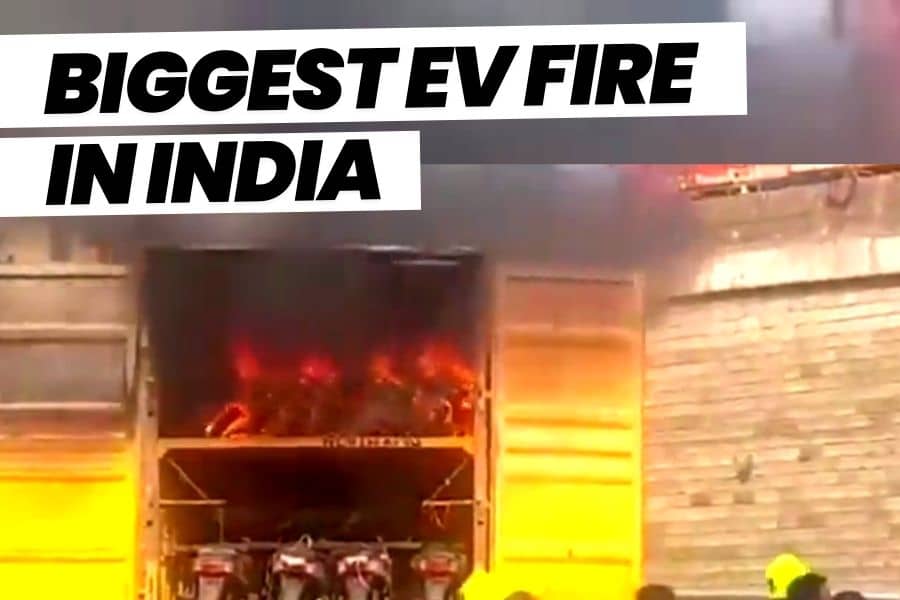 Onset of Indian summer has created havoc for the Indian EV Industry as the biggest EV fire so far breaks out in a shipping container in Nashik, smoking 20 electric scooters.

Nasik – 12th April 2022: On the 9th of April, 20 electric scooters from Nasik-based  EV company Jitendra Electric Vehicles completely burnt into ashes. The incident took place near Nasik when the Electric scooters were being transported from the company’s Nasik factory.

As per the reports, the container had a total of 40 Jitendra EV scooters, meanwhile, a fire broke out in the upper deck containing 20 Electric scooters. Overall, in this biggest EV fire incident so far in India, 20 electric scooters were completely burnt in flames and smoke.

The incident is still under investigation, electric scooter fires could be caused due to temperature variations, short circuits, overcharging, deep discharging, poor Battery Management system(BMS), and thermal runaway. This is not the first fire incident in EVs in India, 5 such incidents are reported so far during the onset of the Indian fire.

Like all other EV fire incidents, videos surfaced over the internet showing 20 EVs bursting into flames wherein, netizens are seen trying to control the fire. However due to the thermal runaway, which could have possibly caused the fire, the entire reck of electric scooters burnt into uncontrollable flames and smoke.

The company spokesperson issued a statement addressing the fire incident that took place near Jitendra EV’s factory gate on 9th April 2022. Safety being the top priority of the company, the fire was brought down quickly by the rapid response team.

The company has taken the vehicles to its R&D center to investigate the matter further. So far root probable cause of the fire is not known yet, but the company is optimistic to find one and update EV buyers in India.

These electric scooter fire incidents during the onset of Indian summer have created concerns about EVs, at a time when people have just started the shift to electric mobility in India.

Fire incidents have created havoc for the Indian EV market raising safety concerns, The GOI has prepared a team of experts to initiate inquiries about the incident, as it is the sixth EV fire incident in India. As per the reports, the government officials have already started investigating the Jitendra EV company, and are asked to submit a file report on the fire incident.

Some of the major reasons that can cause fire in Electric Scooters are:

A thermal runaway is an exothermic reaction that occurs inside a lithium-ion battery that causes massive heat, the generated heat exceeds and is released to the surroundings. A lithium-ion battery on fire is very difficult to extinguish, and hence it causes fire hazards.

The lithium-ion battery which is imported by the Indian automakers from China and Korea is not designed or tested for the Indian climatic conditions. The extreme heat of harsh Indian summers could shoot up the battery temperature to 90-100 degrees, resulting in an electric vehicle fire.

The imported lithium-ion battery comes with a poor battery management system(BMS), which is not suitable for the Indian weather temperature, and road conditions, which can cause EV fire.