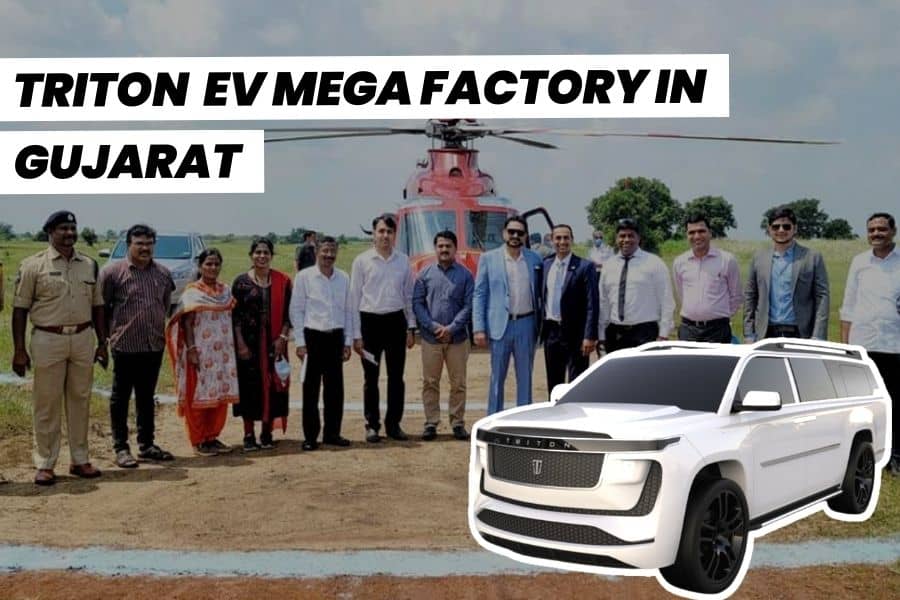 While Tesla trying to enter the Indian Automobile sector, Triton EV is likely to set up a manufacturing plant over an area of 600 acres in Gujarat.

Gujarat: 30/03/2022: Having the potential to become the world’s largest EV market, the Indian automotive sector is witnessing the influx of many international carmakers, trying to grab the opportunity during the nascent stage of EV adoption in India.

Triton EV recently announced their plan to set up an electric vehicle manufacturing facility in Gujarat to produce EVs for Indians as well as to cater South-Asian Markets. With higher import duties, the company made a wise choice to set up local manufacturing in order to get benefited from Indian EV policies. The Triton EV factory is likely to boost the Indian EV sector significantly in the long run.

Not much is revealed yet about the location, but Triton is likely to set up the manufacturing plant over an area of 600 acres. Company CEO, Himanshu Patel is highly optimistic about the new Triton EV factory and stated it to be a three million square feet mega EV factory.

Earlier in 2021, Triton EV showcased its Triton Model H electric SUV in Telangana. While the launch, Triton EV announced its India plans to set up a local manufacturing facility in Zahirabad, Telangana inlining the GOI’s “Make in India” scheme.

CEO, Himanshu B Patel stated India is a very important market for Triton EV, and the company is likely to set up its biggest manufacturing plant in India after the US. The company is highly excited to manufacture Triton Model H electric SUV indigenously in India, in the new facility.

Triton is likely to manufacture electric cars, SUVs, and delivery fleets in the new to be set up Triton EV factory in Gujarat, which will be sold in India as well as other South Asian countries.

The current market for imported electric cars is not so good in India because of the higher import duties, the reason why Tesla is not able to make its way into the Indian EV market. The government’s push toward local manufacturing under the “Make in India” scheme has forced many foreign companies to set up EV manufacturing plants in India.

For a year, Tesla has been planning to enter the Indian EV market despite the higher import duties by seeking consideration from Central Government

to incentivize import duties. However, Tesla has not yet confirmed any location for the establishment of a local manufacturing facility in India.

Gujarat currently offers huge incentives for EV manufacturers and buyers to accelerate the shift to electric mobility. Any company setting up a manufacturing plant in the state is likely to reap the benefits from the state’s EV policy.

In such a nascent stage, Triton’s EV manufacturing hub in India is likely to create a long-lasting impact on the Indian EV ecosystem. Local manufacturing of electric cars, SUVs, and pickups will significantly reduce the price of EVs in the Indian electric vehicle market.